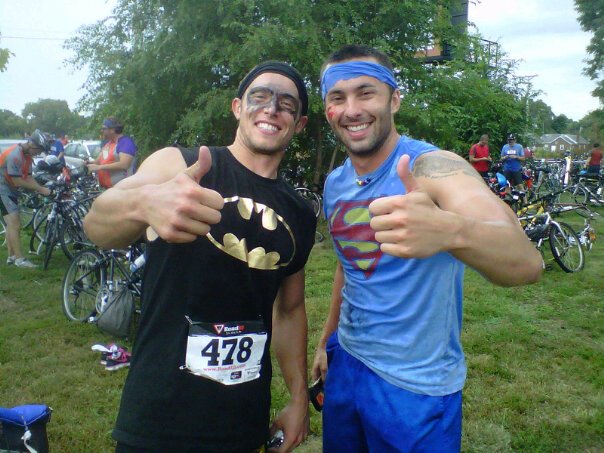 50k Advice to a First Timer

My friend Travis is currently sitting in an airport awaiting his flight to Virginia where he is going to willing put himself through pain an agony for 31 miles.  He’s never ran a 50k before but is prone to crazy events that push him past the edge of comfort.  He is one of the most mentally tough people I know (i.e- dumb enough to never quit)

His only marathon was in college when he asked his sister to “drive me 26 miles out of town and I’ll run back.”  At about mile 20 he realized “huh, probably should have packed some water…”  At mile 22 he realized “huh, probably should have brought a map.” Lost and dehydrated he finally made it to a gas station around mile 26, called his sister, and admitted that he was lost and asked her to pick him up.  He physically could have handled an ultra marathon back to his dorm but it was getting dark and the dude is the worst person I know at directions.  He would have, most likely, been out there for days.

Oh yeah…he did all this just months after getting his achilles tendon reattached due to a football injury.

The dude is tough.  I’ve seen him go into “mindless mode” hiking 14ers, fight through cramps like the Terminator in adventure races, and puke on a offensive lineman in football (I don’t know why that last one is important…but the visual still makes me laugh…to Travis’s credit his opponent lost all will to play football for the rest of the game)

Although he’s a tough guy, I’m curious to see how he responds in a 50k.  So much of it is learned through experience.  Figuring out what to eat, how to stay hydrated, and how to stay one step ahead of fatigue.  First timers usually struggle a bit with these until they figure out what works for them and their bodies.

I told him I would write this article and give him a few little tricks that will help him have a successful race.

At the end of the day an ultra is that simple.  Keep putting one foot in front of the other until you eventually cross the finish line.  You can run, walk, limp, crawl, whatever as long as you are keeping forward momentum.  All that matters is forward progress.  You will get there.

Travis has already promised that he is getting across the finish line “even if you have to drag my cold dead body.” So he already has the ultra-runner trait of pure stubbornness working for him.

Consume calories early!  Consume calories often!  This should be his mantra.  Eating food in the first few miles feels really weird.  “I don’t need this yet!”  But if you want to be successful you have to stay one step ahead of the inevitable bonk that comes from calorie depletion.  Keep supplying our body with energy!  This is of the utmost important.  Eat when you’re not hungry…especially when you are not hungry!

Enjoy the view, celebrate the energy of the other competitors, laugh at the bizarreness of the event.  Heck maybe you can appreciate the fact that for one day only you have NO RESPONSIBILITIES except taking one step and then another.  We are so busy in life.  There’s always a billion things going on, so many responsibilities all the time.  But in a long race, all of that fades away.  Appreciate that!

I’ve preached the beauty of running shorts for YEARS to this man and he refuses to listen.  I do not know what biases he has against running shorts, but the dude needs to get over it and purchase some.  If only he would try them out his eyes would be open to their amazing anti-chafing qualities.

Find someone running around your same pace and talk to them.  Be social.  They could be a key contributor to your ultimate success.  If they are experienced ultrarunner they will be able to share great advice that could help you get across the finish line.

“If I make it to the next aid station I will allow myself to listen to a kickass song.”  “When I hit ten miles I’m going to let out a primal roar!” “If my pee is clear, I will do a little dance.”  Silly little rewards keep the race fun and will help the time fly by.

Find a freezing cold stream and sit in it at the finish line (or during the race….or just dip you foot in it).  It will help your muscles recover after the destruction they just faced.

There are probably a million more tips I’m forgetting but will share with him on the drive to camp tomorrow.  I will be back sometime after to share the story of our adventure.  It’s going to be a great time!  RunBum puts on some of the best races in the Southeast.  Check him out if you are out this way!