How are you spending your energy?

Life is all about energy. (As a science teacher I nerd out over this concept)

And the strange thing is this: we have a finite amount of energy.

You need to be conscious about how you are spending your energy.

I recently (literally 2 minutes ago) heard this quote from filmmaker Kevin Smith:

“In the same time you are wasting s****ing on things on the internet, someone else is spending their energy moving towards their dreams.”

Be aware of how you are spending your energy.

Let’s play a quick game of “would you rather”:

Would you rather criticize, critique, “hate”, rip down something someone else has created OR would you rather use that time to pursue one of your own dreams?

Would you rather be an armchair quarterback or the guy in the damn game?

Would you rather waste hours upon hours complaining about something out of your control or spend that time doing the things you CAN control (self-improvement, relationship building, adventure seeking)?

I sure know my answers.

The People Who Surround Me

My mom just got back from mountain biking in Moab.  My dad is about to embark on a 6 week road trip to Alaska.  One of my best friends is three days into his quest to hike 75 mountains in 75 days (14ersproject.org)  Another best friend has lost a bunch of weight being consistent and persistent in his running and diet.  I have a cousin who is 2 months away from a multi day stage race in Iceland (runiceland.org)  My wife is finishing her 3 year medical residency (really an 11 year grind).  And there’s probably hundreds of other people in my life doing amazing things!

Last summer I turned to the Iron Cowboy for my daily inspiration as he completed 50 ironmans in 50 states in 50 days.  To find this year’s motivation I have to look no further than the people closest to me.  That’s quite incredible.  I don’t think everyone is able to say that.

So today I want to express gratitude for everyone in my life who is out there accomplishing their dreams, striving to make themselves better, and exploring this beautiful world.

I’m a lucky man to have these adventurers in my life.  I’ve been raised to love the outdoors, to seek exploration, and to realize the importance of seeking life journeys.  I am surrounded by people whom I care about who share the same ideals.  You guys all inspire me to be a better person and to reach higher than I thought possible.

Thank you so much for the joy you bring.

What is the one gift that is free, abundant, and easy to give to everyone??

Give this to your friends, to family, to strangers, to coworkers.  Give this to everyone you meet.

This is what I truly believe I am best at.

Everyone has aspirations and dreams they are pursuing.  They will feed on your encouragement.

A dream can probably be accomplished without people encouraging them, but it’s a helluva lot easier with encouragement.

So encourage others.  Assist them along their journeys.  You will probably be encouraged back.

What skill could you learn if you spent 100 days of intentional work EVERY SINGLE DAY?

How good of shape could you get into if you spent 100 days of intentional exercise EVERY SINGLE DAY?

How much improvement would you see if you practiced EVERY SINGLE DAY?

I’m awesome at this….in some areas.  I’m terrible at this in other areas.

I know this idea is the key to open many doors in life.  I’ve seen it work its magic.

But it’s still hard to get right in other aspects of my life.

Ever since I was in 7th grade I have wanted to learn how to play the guitar.  I was an EXPERT at air guitar as I imagined myself on stage rocking the heck out!  So I begged and begged my mom to buy me one.  “I promise I’ll practice every day!”  Guess what happened?  For a few months I stuck to my promise.  Then time passed and the guitar sat there more and more.  The sadness of an unplayed guitar.

Every so often I would get inspired.  “Now I’m really going to learn the guitar!”  For a few weeks I would consistently play.  Then I would play less and less until it resumed its job of sitting there.

I’ve been stuck in this cycle for YEARS.

Recently I’ve gotten a little better, practicing a few times a week or consistently playing for a few months.  But I’ve struggled at incorporating this into my routine even though I know the magic of being consistent and persistent.

This is why it’s really important to be held accountable, which is where my friend Calvin comes into play.

100 days to practice a new skill, compete in different exercises, to accomplish a goal.

You can join it here at join100club.com

Joining is free and will do nothing but benefit your life!

Can’t you do both?

Why not work smarter AND harder.  Isn’t that inevitably the key to success?

This is why “hacking” has always bugged me.  It seems unhealthy to be obsessed with shortcuts.

You need to develop your HARD WORK MUSCLE.  This seems a lot healthier in the long term.

Combining intelligence and hard work will be the most useful tool driving you towards success (in whatever area you are striving for).

So before you start working hard at something- do your research, do a pre-mortem, come up with a blueprint, breakdown your goals into smaller more achievable benchmarks.  Come at the goal with a well thought out plan.

Guess what?  By creating a plan, you’ve already put in some dastardly hard work in the form of time consumption and mental energy.  Gasp!

One thing that can destroy your mission to develop good habits or accomplish your goals is self doubt.

The little voice inside your head questioning your worth.  Being critical of every little decision you make.

How do you eliminate self-doubt?

You build momentum.  You start small.  You make good decision day after day after day.  Each small act of good habit lays the foundation for your inner monologue to change.

Slowly you change self doubt into self advocacy.  Now the voice is telling you how much you rock!

Self advocacy becomes self love.  Strive for self love- over time you can get there!

“Self esteem is earned through esteemable acts.”

– Someone on the Rich Roll Podcast

Craving Olives and Other Bizarre Oddities of Training for an Ultra

I’m 6 weeks out from the Grayson Highlands 50k so its time to kick training into full gear.

Last weekend I completed back to back long runs and I have a 22 miler scheduled for early Saturday morning (way early…screw you daylight savings time).

Although those are the two big training runs (along with a spring break trip to the mountains near Blacksburg, VA), during the next few weeks somethings will inevitably happen:

I will keep you guys updated throughout the training.  I’m really looking forward to this race because my best friend and his wonderful girlfriend will be flying out from California to join the adventure!

Holy crap!  A few things happened this week that all blend together to help me understand one idea….INERTIA.

First of all, my Clark Kentesque personality during the day is mild mannered 8th grade physical science teacher.  This week we learned the classic “Newton’s 3 Laws of Motion” concept and if you don’t remember Newton’s 1st law is thus:

An object in motion stays in motion and an object at rest stays at rest, unless acted upon by an outside force.

This is the idea of inertia.

Here’s another way of putting it:

It’s a challenge to build momentum.  Starting something new is really hard.  The beginning is the most difficult part. Once something is already in motion it gets easier and easier.  Eventually it’s hard as hell to slow down.  After awhile, stopping is nearly impossible.

END_OF_DOCUMENT_TOKEN_TO_BE_REPLACED

Routines can be good.  You can develop good routines, you can do those routines day in and day out and you will see a major benefit to your life.

But, every so often, it’s good to rock yourself out of your routine too.

You could go on a trip, try a new activity, wake up earlier, sleep in, meet someone new, eat something new.

Do something that shakes up your routine.

To me there’s no worse saying than “same shit, different day.”  When that line is belched out I have a physical reaction.  This person hates their routine.  But they have accepted it as the norm.  They are unwilling to change something that is making them miserable.  Have they just given up?  Do they not see the world for what it is: an opportunity to explore.

Routines are whatever you make them: good, bad, meh.  But be willing to break your routine every so often.  This allows you to experiment with it.  Maybe you discover that you need to drop a part of it, or maybe you need to add something to it?

Explore life!  This word is insanely beautiful and full of wonderful opportunities to experience this beauty.   Do not fall into the trap of “same shit, different day.” 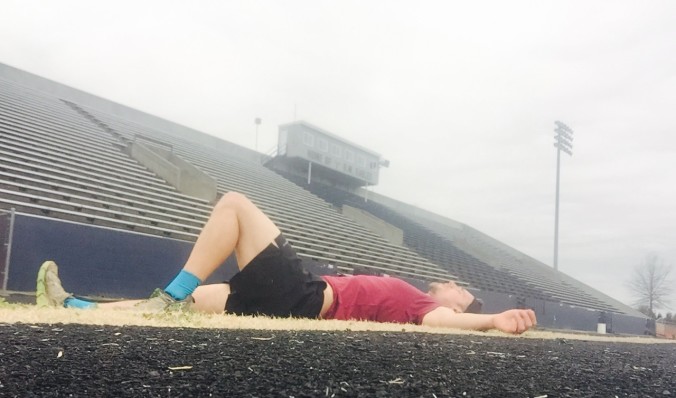 “Do Something You Hate” Tuesdays

This is a movement.  A movement to rock people out of their comfy routine.  Something to force discomfort into their lives.

It’s called “Do Something You Hate Tuesdays”.

Let’s be honest, Tuesdays are the worst day of the week.  You don’t have the end-of-the-week joy of a Thursday or Friday or the “sigh…we’re halfway there” feeling of a Wednesday.  You don’t even have the self-righteous “It’s Monday, I’m mad, and YOU’RE going to hear about it!”  Tuesdays are just…there.  They just exist.

So for the last month, I have done something special on Tuesdays.  I have pledged to “do something I hate.”

For me its track workouts, bear crawls, and stadium stairs.  The more mind numbing and physically exhausting, the better!  These workouts are boring, brutal, and very VERY painful.  By the end of the workout I’m usually drenched in sweat, limping around like John Wayne, and muttering “$*** that was ****ing hard.”