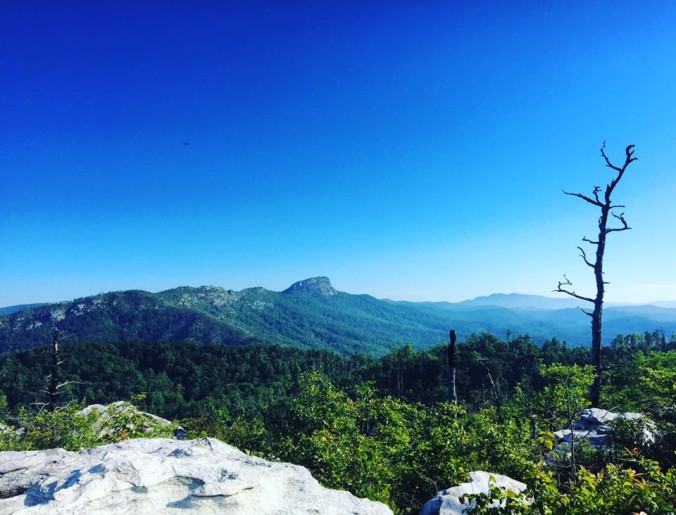 The mountain ridges between Shortoff and Table Rock

Linville Gorge Adventure: How to overcome dehydration and self doubt

Trail running in the Linville Gorge (about an hour east of Asheville) has been a goal of mine ever since we moved out east.  Like a Game of Thrones character this area goes by many different nicknames: the most rugged wilderness on the east coast, the Grand Canyon of the East, or simply the gem of North Carolina.  It is only one of two gorge’s east of the Mississippi and is one of the only hikes around here where you find complete isolation (similar to a hike into the Rocky Mountains).  In otherwords, the Linville Gorge is unlike anything else in the Southeast.

Two years ago I ran my second 50k up some dirt roads on the east side of the Gorge.  It was in a miserably cold rain storm in the middle of December.  A 33 degree downpour where I was lucky to even move my fingers enough to put my gloves on (on the plus side the thought of “getting the hell out of the cold” made me run pretty fast).  As I was running through the fog, I could only see a few feet in front of my face .  I kept thinking to myself “you know, I bet this area is unbelievably gorgeous in nice weather.”  I’ve been meaning to come back ever since.  Sunday night I got the view that was taken from me that day.

Yeah….the Gorge is beautiful.  I was nearly overcome to the point of tears at what I was seeing.

The next day I met a friend visiting from Iowa and we spent the morning hiking around the Blue Ridge Parkway (Black Balsam Knob, Sam’s Knob, Skinny Dip Falls….all very suggestive names).  That afternoon we met his family and fueled up on breweries and delicious food before I headed back to my campsite at Lake James.

Tuesday morning was my big adventure of the trip.  The plan was to trail run out and back from Shortoff Mountain to Table Rock; approximately 12 miles or, as it will be known from here on out, “the most brutal half marathon I’ve ever ran”.

At 7:25a.m., consisting solely on the previous day’s diet of beer and perogies, I began the run.

The ascent of Shortoff Mountain is probably runnable but, in order to conserve energy, I chose to hike it.  25 minutes later I was at the top where I was greeted by a fantastic view of Lake James.

At this point it was already getting HOT…extremely hot.  And, in classic east coast fashion, super freaking humid.

The next two miles were pretty flat as I traversed the eastern ridge of the gorge on the Mountains to Sea trail.  At times I weaved into the woods where tree branches, thorn bushes, and high grass covered the rocky and rooty path.   (NOTE: all measurements are estimated as I’m too lazy to look up actual distances…your welcome)

The sun was pounding down and dehydration was fast catching up to me.  I had three full bottles; two in the front of my Ultimate Direction pack and one stashed in the back and I was determined to be very conservative on the first half of the run.

Eventually I descended to Chimney Gap and began the climb to the chimneys.  This was the climb that almost broke me.  No tree cover meant that the steep trail was SCORCHING HOT.  Instantly I was soaking wet….my clothes felt like I had just stepped out of a pool.  All this sweat means I’m losing A LOT of electrolytes and tons of water…I need to rehydrate soon.  I chugged a half bottle of water and fought off the voice telling me to turn around.  This mountain will not beat me today became my mantra as I huffed and puffed up the hill.

I love these moments.  When you have to conquer that inner monologue.  Your brain stuck in that negative loop as “doom watch 2016” has taken over and you are stepping into battle with that part of your brain.

I haven’t always been good at battling my own negativity.  Doom and gloom mode has emerged victorious many times before.  “Pre-adventure seeking Chris” would have turned around, whereas over the last few years I have discovered that my body is can push past obstacles that my mind deems too difficult.

This is why everyone NEEDS to create these mini-adventures- self understanding.

You will improve by leaps and bounds once you challenge yourself into tough, grinding, brutal situations.  Step outside your daily routine and find these challenges.  They will be uncomfortable…even miserable at times, but seeking that is a GOOD THING.  These situations will help you discover what you are capable of!  And at the end of the day you will look back with a smile thinking “I can’t believe I almost gave in…what was I thinking??”

At the Chimneys I ran into an Outward Bound rock climbing group who informed me that “no there is no running water at the Table Rock Picnic Area.”  Good thing I was being conservative.  Once I got to my turn-around at Table Rock I chugged a half bottle of water and began to retrace my steps.

It was a tough two hours (and only 6 miles) to the halfway point so I took a few minutes to rest and appreciate the view (and chow down some Honey Stinger Gummies).

The way back was beyond challenging but pretty uneventful consisting mostly of me bargaining with myself…”Okay if you run for the next 20 minutes than you can drink a half bottle of water.”  This helped fight off the dizziness of dehydration as I dragged my scratched up smelly body through the mountains.

I made it back to Shortoff and finished my water.  The last mile was a downhill quad burner that seemed to go on forever.  Two things kept me going: the dream of sandals and of pouring a bunch of cold water all over my body.

10 minutes later I got both of those things.

I was a happy boy.

Throughout the 4 hours (my slowest half marathon!) I faced self-doubt, dehydration (my pee was almost brown by the end), and the fear of isolation in the wilderness.  Make no mistake about it this was mental toughness training as much as it was physical body training.  Overcoming those challenges made me BETTER.  I drove away from the Gorge BETTER than I was 4 hours before.

That’s why we have adventures.