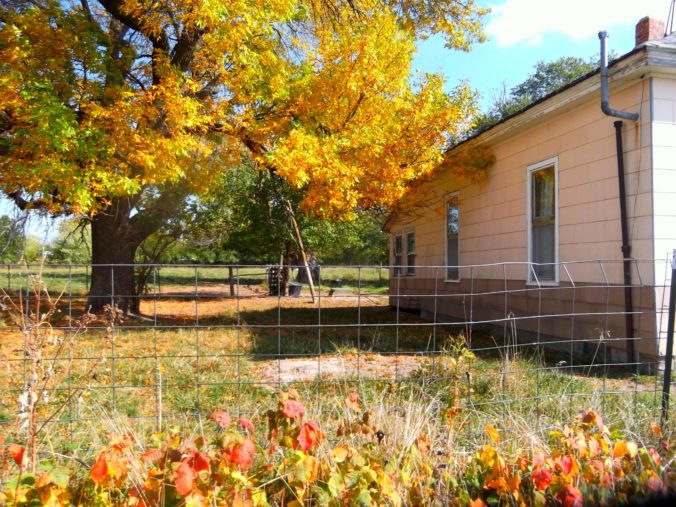 “Joe…we spotted one east of Richard’s farm.”  The message came through the old timey CB radio.

My grandpa Joe reached under his bed and grab his gun.  Yeah, it was probably loaded…not the epitome of safety.  Especially around an 8 year old who spent the majority of his days pretending to be Indiana Jones.  But after proper instruction and numerous warnings from my dad, “do NOT touch grandpa’s guns or it will not END WELL FOR YOU”, I was pretty much never going glance, let alone touch one of the rifles.

We stepped out the door of his small, four room farm home, walked past the run-down “hound house”, next to the pasture’s handful of cows, and into his old brown pickup truck.  You know, the ones with the bench seat, the stick shift, and a hint of cigarette smoke.  Nothing fancy, just enough to get by doing what needed to get done.

And this afternoon, there was one thing that needed to get done.  Kill the coyote that keeps terrorizing Richard’s farm.

I slid into the seat next to my 80 plus year old grandpa and watched as he shifted the truck into gear and pulled on down the road.

He seemed grizzled.  A man who survived the depression hopping trains, hunting for his food, and getting by through the means of HARD WORK.  Work so hard that I probably couldn’t even wrap my pampered mind around it.  Road construction all day, every day.  Road construction that eventual led to a small south pacific island during World War II…but that’s another story for another time.

Fact of the matter…grandpa was tough.  He was hardened, maybe a little cantankerous, definitely opinionated, and all the while a loving gentle soul committed to his family, friends and town.

And today this loving, gentle soul was driving down main street of Milton, Iowa (pop. 60) with the intent of blasting a pesky coyote.

The next ten minutes were filled with static crackles from the CB as our truck was joined by at least six or seven other almost identical trucks.  A community of people determined to help their neighbor.

“We spotted him heading north on Sunset Drive.”

“Above Harrison Street?  By the new pond?”

The trucks pulled up, parked in a giant circle.

The coyote was in the middle, surrounded.  No escape.

They stepped out of the truck, decided who would shoot, someone raised their gun, fired, and down went the coyote.  Grandpa stepped forward with his knife, skinned it for the fur, got back in his truck and we took off down the road, back to his house.

Or did you stop reading halfway through?

This goes against my beliefs.  I refuse to even acknowledge that this kind of MURDEROUS activity goes on!

I would be lying if I told you, as an 8 year old, I was not conflicted by this experience.  This was a complicated day that obviously still sticks out in my mind.

I really did not enjoy the idea of ganging up on, surrounding and shooting an animal.  But, at the same time, I respected my grandpa and had an understanding of his way of life.

Looking back, the one thing that I am beyond grateful for is that grandpa exposed me to a new perspective: the small town Iowa experience.

No one gives credence to anything the other side has to say, do or think.  I don’t wanna hear it!

And, lord almighty, have we all experienced perspectives refusing to acknowledge each other during what I’ve been calling “longest. election.  ever.”  The bizarre combination of mass media, corporate interest, social media posts, and “team” politics has brought this problem front and center in every moment of our lives.  Don’t believe me?  Just check your Facebook……see what I mean?

If someone disagrees with us the temptations is to completely shut them out, dismissing them as idiotic, backwards, or just plain evil.

And it’s EASY to block them or tune them out and seek out information that solely is molded to our own “correct” opinions.  It has never been easier to shut out someone else’s view.

Why are we so willing to ignore perspectives that conflict against our own?  Why do we shy away from experiences outside of our norm?

Do we not see the benefits to be gained by exposing ourselves to someone else’s perspective? How much more fully-formed can we become if we are actively to experiencing, observing, and considering something that might make us uncomfortable?

The way I see things is simply this:

The world is FULL of various perspectives (in fact, about 7 billion of them).  If I shut myself out to anything and everything I disagree with, surrounding myself with people who think, speak, and look like me, then I am guaranteed the ABSOLUTE minimum the world has to offer.

By exposing myself to new ideas, fresh adventures, and new people I am able to become a more well-rounded, educated human being.  I will have gained the ability to form experienced, intelligent decisions based in the notion of empathy for others and their varying perspectives.

So escape from your box.  Step outside your comfort zone.  Talk to someone who you would normally just completely ignore, travel somewhere completely outside of your norm, listen to a conflicting opinion, experience life as if you were a different person.  Be uncomfortable for a little bit.

By doing this you will create a new norm in your life.  You will become more fleshed out; a more complete person.

And…you might just gain the tiniest bit of understanding of this crazy, complex world.