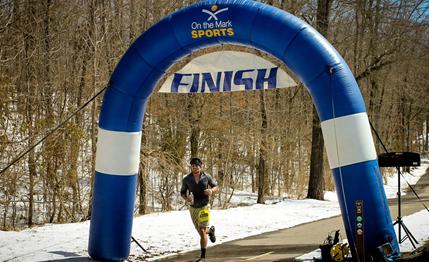 Recently I participated in a trail half-marathon on the local mountain bike trails I train on most days after work.  Having never won any single person event in my life (I came in 2nd in a musical chairs fiasco that still haunts me to this day), I realized that this race was a great opportunity.  The trails were covered in snow and slush which definitely made the race much more challenging as going uphill in slush SUCKED, but the conditions probably worked in my favor (I’m not very fast so I was able to run closer to my regular pace).

It works in football, basketball, hockey, and it also works in running.  I knew the course and I could formulate a strategy around this knowledge.  I knew the flats, downhills (where I needed to speed up) and the uphills (where I could push passed people).  I also had an understanding of the route, which at times was completely confusing due to the fact that it was covered by snow.  This eliminated any pauses from self-doubt or the “I’m lost” feeling.

Train where you will race

​ You know how professional golfers play a few rounds on the course ahead of time to check it out?  (I’m assuming this happens, but as per usual I have done zero research)  I realized the importance of this strategy for racing.  For your next race try generating a “home field advantage” feeling by checking out the course a few days or weeks in advance.  This removes the “not knowing what’s coming up” which has personally held me back in races.  I would try to preserve energy because I had no clue if I was facing a huge hill or way more miles than I assumed I had left.

When I realized I was at the front (we were in snow, so it was easy to tell when there were no tracks in front of me), I was instantly hit with a crazy amount of self- doubt.  These thoughts were so loud that I almost gave in to them.

“They are going to catch up.”

“You won’t be able to maintain this pace.”

“You are going to blow it.”

It was time to rely on my Mantra.  Every time I race I like to have a mantra.  My first 50k was “MTXE”, an old saying from a football coach that stands for “Mental Toughness eXtra Effort”.  For this half marathon I just kept repeating “Is there ease and lightness in what I’m being?”  Am I enjoying this moment I am in?  If I’m not, then I’m weighing myself down thinking about the past (the people behind me) or dreaming about the future (winning or losing).  The mantra allowed me to just focus on my steps and the effort my body was putting forth in that moment.

This quieted my self-doubt. Every once in a while they’d try to rear their ugly heads, but my mantra would shut them down.  I started smiling, laughing, and enjoying myself in the midst of cold and fatigue.

It’s not about the equipment

For the last two months I have had trail shoes with gigantic holes in the side.  I have put off buying new ones for two reasons; 1: I’m cheap (and we just had a baby) and 2: I’m lazy.  “If there’s padding under my feet, then I will be ok.”

So with shoes (the runner’s most important piece of equipment) half falling off my feet, I crossed the finish line.

One runner even joked “This guy proves that you don’t need good equipment.”

Instead trail racing is about grit, enjoyment, preparation, and the ability to stay mindful to the moment you are in….

Holey Shoes in the Snow = Frostbite

…that being said! Holey shoes in ice snow is a dumb idea. My feet were instantly numb.  I’m talking about within the first half mile.

After the race I removed my shoes and saw ice caked on my toes.  Not fluffy light snow…solid ice!  I removed my socks and saw that the ends of my toes were black.  “Oh this is what frostbite looks like…weird!”

After an afternoon and night of soaking them in warm waters, the numb frozen sensation has transformed into a painful someone-is-poking-my-toes-with-tiny-knives sensation.

Learn something new every day!

What I felt when I rounded the corner and saw my wife and newborn daughter standing by the finish line was indescribable. My racing adrenaline was instantly replaced with this amazing feeling of love and I realized that it was all worth losing a few tips of my toes.

3 Ways to Spice Up Your Running Routine