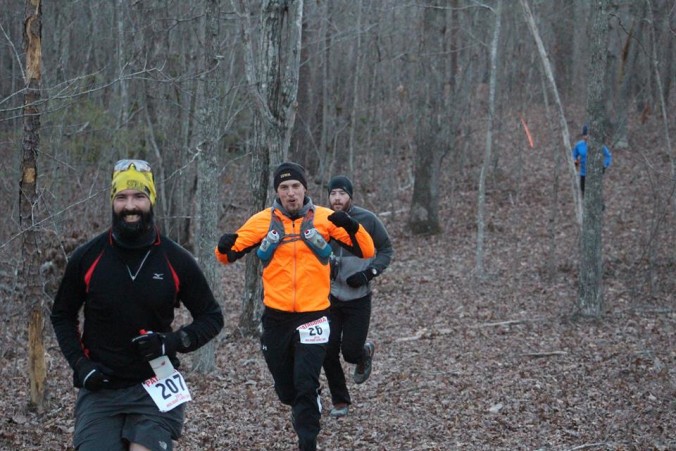 Yesterday I ran the Holiday Lake 50k- a notorious “easy” 50k in Appomattox Virginia (where the Civil War ended).  It’s labeled as “easy” solely based on the very little elevation gain- it is flat flat FLAT.  Personally, I thought that made it harder.  I’m used to hills and I love climbs in trail races because it gives me an excuse to walk (power hike).  Power hiking in an ultra gives you a chance to rest your running muscles for a little bit which helps you save your leg muscles from the pain-in-the-ass (literally) soreness.  Power hiking is wonderful.  If you have the fortitude, it also gives you an opportunity to man-up and pass people on the uphills.

Needless to say, this race had very FEW uphills.  This time there were maybe two or three that took less than a minute to ascend.  That means the rest of the time you were running…nonstop.  No breaks, no walking, just repeatedly pounding your legs repeatedly for 31 miles!

And people ran FAST!  The winner won in 3 hours and 50 minutes which is flying!

The race was essentially two loops.  You ran around the lake once for about 16 miles and then turned around and retraced your steps.

For a 50k you couldn’t ask for a better course.  The aid stations were perfectly spaced out about every 4 miles.  I would highly recommend this race as a beginner 50k because the race director, the legendary David Horton, obviously knows how to design a race course and, considering this was the 26th running of this event, every aspect of the day ran SMOOTHLY.  In fact, the majority of the people I met on the course were first time 50kers!

The main antagonist of the day (besides sore legs, blisters, and IBS) was the cold.  To be fair, it wasn’t as cold as it was forecasted, but it was still COLD.  Starting at about 15 degrees and ending at 25 degrees with a nasty cold wind, the race was home to plenty of frozen beards and men in running tights.  I started out with two pairs of gloves and then realized that my hands were burning up.  Instead of taking time to put them in my running pack, I just shoved them down my pants (also my strategy for getting rid of my GU wrappers) and used them to insulate my boys.

My favorite part of any Ultra (besides the post race pizza and beer) is getting to know the other runners.  Everyone in this community is so nice and chilled out and the ease of conversation makes race day fly by.  I caught a ride to the start line with Brandon, a fellow runner, and his family after meeting them at the hotel the night before (so that my wife and two year old could sleep in a little bit).  They were so unbelievably nice and I hope to see them at more of these events in the future.  The other racers I met throughout the day were also very nice and inspiring (Susie the 7th place female was a freakin champion and I owe breaking 5 hours to trying to keep up to her brutal pace during the last 5 miles).

My wife and daughter met me at the finish line.  They were my inspiration all throughout the last half of the race as my stomach slowly turned on me.  Usually I can eat anything at anytime, but for whatever the reason, I could barely put down a cup of ginger ale during the run.  Knowing that I needed calories, I grabbed food from every Aid Station but had to force myself to attempt eating.  Seriously, it took me 20 minutes to eat one Oreo.  I would take a nibble, feel like puking, wait a few minutes and try again.  My theory is that my stomach wasn’t responding to sugar after essentially giving it up completely in January.  Whatever the case, I definitely made a few trips to the woods (too much information) and by the end of the race was feeling VERY calorie deficient.

I finished, met my beautiful crew- the two prettiest ladies I know- changed out of my wet clothes, and (once my appetite came back) proceeded to eat ALL the food in sight- I’m talking BBQ sandwiches, peanut butter M & Ms, animal crackers, and of course PIZZA!!!!

All in all it was a wonderful day!  Can’t wait for the next one!

(PS- I finished 18th in my age group in 4 hours and 55 minutes- a new Personal Record.  My goal was to break 5 hours.  Mission accomplished!!)