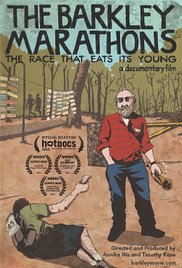 Movie Review: Barkley Marathons “The Race that Eats its Young”

“If you’re going to face a real challenge, it has to be a REAL challenge.  You can’t accomplish anything without the possibility of failure.”- Laz

Unforgiving Tennessee mountains, a psychotic (in the best way possible) and quite hilarious race director,  random books scattered about, a conch shell, over 100 miles of brutality, razor sharp thorn bushes, 40 racers seemingly lost in the woods, taps, blood, sweat, and tears, and no trail.

You can keep your Super Bowl- this is the greatest event in America.

Barkley Marathons takes place every March in Frozen Head State Park in Tennessee.  Since 1986 only 14 runners have completed it.  It is straight up and down mountains through unforgiving wilderness.  Runners gain 12,000 ft of elevation in one 20 mile loop.

To complete the event, they must run 5 loops.

The documentary is all at once fascinating, inspiring, painful, and very VERY hilarious.  The rules/ traditions of the race are as bizarre as their race director “Laz”.  I don’t want to ruin the movie so I’ll only list a few of them here:

There are many MANY more traditions, each one explained by Laz with giddiness and a smirk.

The movie is flat out hilarious at times.  My favorite part is the tale of the worst Barkley runner of all time- who spent 32 hours on the course and only covered 2 miles.  How did this happen?  No idea!  The movie just hilariously mentions this story, shows him in an interview in which he admits “I averaged a 16 hour mile”, and the movie moves on.  The story is left to the imagination.

The runners themselves are another fascinating part of the story.  What kind of individuals sign up for something this barbaric, something they know will break them?  Throughout the movie you meet all sorts of participants- men, women, young, old, american or otherwise.  Their views on Barkley are all pretty interesting and throughout the movie you watch them fail…one by one- some laugh at their defeat, some cry, some are happy just to complete a lap.  Watching various people react to falling short of their goal is pretty captivating and it is interesting to see the variety of human emotion.

Not to spoil anything, but there is a runner named John Fegyveresi who steals the movie towards the end.  He represents the every man.  He’s not a sponsored runner.  He’s not coached by anyone.  He is just a grad student struggling to accomplish an impossible goal.  Through his suffering you see a man completely broken down to his primal self.  By the end of the race he is destroyed, exhausted, sleep deprived, limping his way through the woods.  He is nothing except a man striving and STRIVING for his objective.  John is either the definition of mental toughness or complete psychosis or both!

Overall this is a great movie for anyone- running fan or otherwise- if you want to be entertained, see the range of human emotions, and peak in on an event so bizarre that it can only exist in the backwoods of Tennessee.

You can check out Barkley Marathons: The Race that Eats its Young on iTunes (I bought it and watched it twice).  Let me know what you think of it!

They also just added it to Netflix!  Check it out…it will be a good break between binge watching episodes of House of Cards.